Iran has launched missile strikes targeting “terrorists” in the Islamic State-controlled Syrian town of Deir ez-Zour in retaliation for last week’s attacks on the Iranian parliament and at the shrine of Ayatollah Khomeini that killed 18 people – mostly civilians.

The Iranian Revolutionary Guards, elite forces heavily involved in propping up Syria’s Bashar al-Assad, said in a statement on Sunday that it fired missiles from a base in western Iran hitting the headquarters of “Takfiri terrorists” in Deir ez-Zour, eastern Syria, referring to the Iranian terminology for extremist Sunni jihadis.

Although the Revolutionary Guards are fighting Isis in Syria and neighbouring Iraq, it is the first time that the they have admitted conducting such strikes from inside Iranian territory. 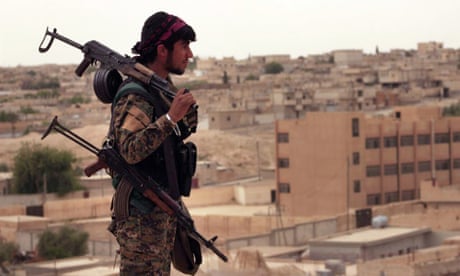 US plane shoots down Syrian aircraft that attacked US-backed fighters

“The terrorists’ command centre, concentration points and logistical centres used for assembling cars for suicide attacks in Deir ez-Zour region in eastern Syria came under attack by the [Revolutionary Guards] moments ago in a move to punish the terrorists for the twin attacks on the Iranian parliament and the holy shrine of the late founder of the Islamic Republic, Imam Khomeini, on 7 June,” read the Revolutionary Guards’ statement, the semi-official Fars news agency reported late on Sunday.

“A number of mid-range ground-to-ground missiles fired from bases in Kermanshah and Kurdistan provinces targeted the terrorists in this operation and struck them with lethal and crushing blows,” it said. “A large number of terrorists have been killed and their equipment, systems and weapons have been destroyed.”

Last Wednesday’s suicide bombings and gun attacks by five attackers on a building adjacent to the Iranian parliament and the mausoleum of Ayatollah Khomeini, in south of Tehran, were the first terrorist attacks claimed by Isis within Iran.

The Revolutionary Guards vowed last week that “the spilling of any innocent blood” will not go unanswered as it blamed Saudi Arabia for the twin attacks. Within a few days, the forces announced that they had killed the alleged mastermind of the Tehran attacks in an undisclosed location abroad. Iran has since also carried out multiple arrests, rounding up people suspected of aiding the attackers.

Iran’s ambassador to the UK, Hamid Baeidinejad, praised the missile strikes: “Missile attacks against Isis military base in Syria manifested the will and capacity of Iran to fight against terrorism and security threats.”

A video circulated online, which was also carried by Iranian semi-official and state news agencies, appeared to the show the moments the missiles were fired. Mohsen Rezaee, a former head of the Revolutionary Guards, also reacted on Twitter, saying: “This is the beginning of taking revenge from Daesh [Isis]. A bigger slap in the face is yet to come. The supporters of terrorists should take heed of Iran’s message of strength.”

Analysis ‘The war after Isis’: has Trump opened the door to conflict with Iran?

As US forces strike Syrian militias backed by Tehran, many fear delegation to the Pentagon and the looming defeat of the Islamic State could fuel a fiercer fire
Read more

Earlier in the day, Iran’s supreme leader, Ayatollah Ali Khamenei, met with families of Iranian forces fighting inside Iraq and Syria, domestically referred to by the Iranian state as “defenders of the holy shrines”.

Khamenei defended Iran’s role in Syria and Iraq, saying: “If the defenders of the holy shrine were not there, the enemy would have brought the battle to our streets by now.”

He also took aim at US president Donald Trump. “Don’t take all the huff and puff of the new comer in the US seriously,” Khamenei said, according to the transcript of his speech on his official website. “The US has always wanted to overthrow the Islamic establishment of Iran. And they have always failed.”

Lockdown pushed till May 7, Int’l flights to remain suspended till May 13

Pakistan has asked Nepal to play its role as the chair of the South Asian Association for Regional Cooperation (SAARC) for peace and stability...

Lockdown pushed till May 7, Int’l flights to remain suspended till...